The objective of this research was to evaluate the effect of three different spray treatments in overcoming the effects of a –2oC or a –4oC minimum air frost. Therefore, providing organic apple growers with effective technology for protecting crops against the effects of freezing spring temperatures.

The data presented in this reports indicate that application of Warmth Spray thirty-six hours prior to a freezing event resulted in some protection against low temperature injury of apples. Further work should be planned to establish (a) how long these effects persist following treatments, and (b) if similar effects occur on other crops, particularly stonefruit and winegrapes.

In the future, two issues need to be addressed:

Spring frost can have devastating effects on orchard productivity. Hawkes Bay experienced at least three damaging frosts in Spring 2002 (September 15, September 25, October 5), with early flowering apple cultivars being most severely affected. The latter of these three frost was the most severe, with temperatures at screen height as low as –3.5oC recorded in some areas. Kiwifruit growers without overhead frost protection reported losses of 80-100 percent. Summerfruit losses were estimated at 70 percent within the region. Apples tend to be most sensitive to frost at the full bloom stage. Figure 1 shows average hourly temperatures overnight during the freezing event in Hawkes’s Bay on October 4/5 2002. During this freeze event at Havelock North, the minimum reached –1.6oC at 4 PM, but stayed below 0oC for 6 hours.

Fruit growers use many different methods to reduce the risk of injury from Spring frost. Wind machines and helicopters are used to raise air temperature by mixing freezing air with warmer air where a temperature inversion exists. Overhead sprinklers are used to protect sensitive tissues by encasing tissues within the ice above freezing. These technologies are expensive and not always successfully employed. Foliar application of urea has also been used to enhance freezing protection of fruit crops such as avocado and peach (Zilkah et al., 1996). There are other chemical sprays that are either claimed or believed to have some protection against freezing in injury. OPGNZ Ltd. (Hawkes Bay) contracted HortResearch to evaluate the efficacy of some of these spray treatments.

Three different spray treatments were applied to ‘Royal Gala’/M9 apple trees growing in pots with a backpack sprayer to the point of leaf wetness. At the time of spraying spur clusters were at full bloom and clusters on one-year wood were at the popcorn stage (Figure 2). Six trees were sprayed with each treatment on the afternoon of October 23 2002 and there were an additional six untreated control trees. The treatments are listed in Table 1 below.

On the following day three trees of each treatment were moved into each of two climate rooms at HortResearch’s NZCEL facility in Palmerston North. The temperature in each room was programmed to drop to an overnight minimum of either 02oC or 04oC on the 24/25 October. Thus, the treatments were applied approximately 26 hours to the freeze event. Air temperature was logged within each room to record actual temperatures (Figure 3).

On October 25 the trees were moved out of the climate rooms and returned to the orchard. The effects of treatment on crop load were assessed in December by counting the number of fruit per square centimetre branch cross-sectional area (crop density) on two sample limbs per tree. Normally, freezing injury to apples at this stage of development results in greatly reduced fruit set and crop density values.

Figure 2. Stage of development of flower clusters on spurs (left, full bloom) and on one-year wood (right, popcorn stage) at the time spray treatments were applied. 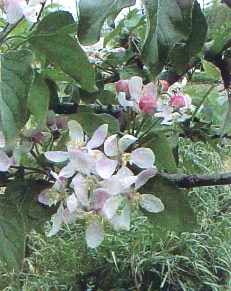 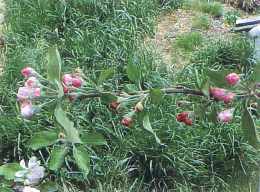 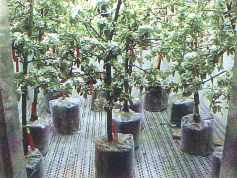 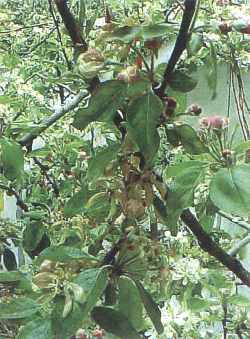 The data presented in this report indicate that application of Warmth Spray thirty-six hours prior to a freezing event resulted in some protection against low temperature injury of apples. Further work should be planned to establish (a) how long these effects persist following treatment, and (b) if similar effects occur on other crops, particularly stonefruit and winegrapes.