Carried out by McArtnety S, Ward S, Dayatilake GA & Wunsche JN for HortResearch over March to May 2003 season in Hawkes Bay NZ, on Cabernet Sauvignon winegrapes.

From the Executive Summary of the HortResearch report 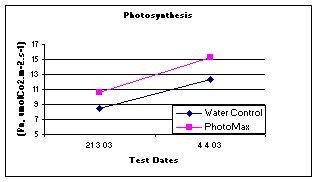 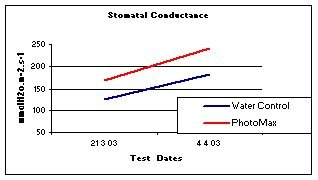 A common spring problem, in dairy pasture and at higher latitudes is the accumulation of high nitrate levels, due to low photosynthesis levels. By increasing the plants photosynthesis, this problem can be overcome. Nitrates are metabolised into higher quality grass.

These two graphs is of five trials on dairy pasture. All show reduced nitrate levels in the PhotoMax treated areas. 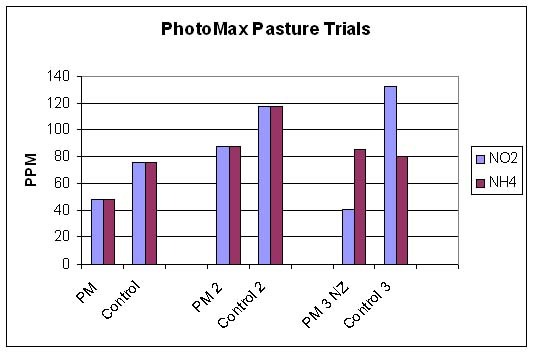 The first graph is of three seperate on farm trials, while the second graph is a series of formal block trials, carried out on the same paddock. The paddock had been in maize through the summer, been fertilised noramlly with urea and allowed tog row for a month. The trial areas were sprayed and the samples were taken to weeks after spraying. This is before the cows grazed the pasture. The trial was run through late April / late autumn, and the weather during this periodwas mostly cloudy and raining.

Further trials are ongoing throughout the coming winter and spring.

Peter mentioned the ‘best scientist you’ll ever have has 4 legs & a fur coat’, and how right he was!!
We were given some PhotoMax which we applied to three paddocks on the 12th May as an experiment.
We have 6 milkers doing the rounds at present getting a couple of days in each paddock.
Three days ago I put them into the treated pasture which is a lot greener than the rest of the farm.
I was amazed that I was unable to see where the girls had grazed, and even more astonished to witness their creamier & tastier milk.

They were happy to graze as soon as they got thru the gate and their udders were dripping next morning. – a real contrast to the long pasture they had
been in.
I am no expert at BD, in fact I was a real sceptic not so long ago, but my 6 scientists have given the thumbs up to this miraculous product so I thought I would share their findings with you all.

I have always advocated that I can whip the butter up within a certain timeframe. This process has been taking at least 30-40 minutes until we tried the cream from the BD pasture. I am back to 10 minutes again. Amazing!

I am looking forward to applying PhotoMax to the rest of the farm and following up with more BD with Peter & Glenn’s guidance.

Here is a brief summary of what we have observed after applying BDmax’s Photomax. We applied it at 250mls/ha in 2 paddocks. In both paddocks we sprayed the back half of the paddocks, and not the front half.
Our observations were:
There was a definite preference from the animals to graze the ‘photomax’ areas. This lasted 2 grazing a month apart, where it was obvious.
Before the first grazing I also observed a brix difference of 2 points, I didn’t measure it before the second Grazing.
There was 1000 litre increase in production after the 2nd grazing, compared to the previous 2 day pickup, this production subsequently held thereafter so I am unsure as to wether this was due to photomax or seasonal variations.
I’m keen to try some more trials with the BDMax products as I think they can aid our dairy farm operation

J.B – Dairy Farmer – Waikato NZ
Have just grazed the Photomax sprayed pasture and see the cows spent most of the time on the treated side of the paddock. The cows had been having a little bloat but there was no sign of it while grazing that paddock.

P.B – Consultant to Dairy Farmers NZ
I used Photomax once on some pasture and it lifted the brix reading significantly. It would seem that the greater the light deficit the more effectively it will work.

Cost: PhotoMax has now been priced at $12 per application per hectare ( for larger quantities). One application in early July should have a significant effect for most of the spring. Purchase online here

The 2007 trial results are more dramatic than the 2008 results, due to the very cloudy and cool spring we experienced in 2007. Thus the PhotoMax had a greater impact on the final outcome. 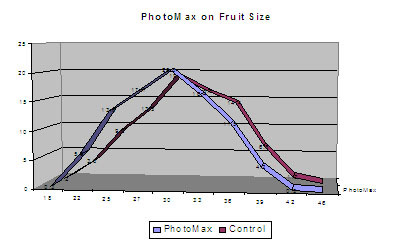 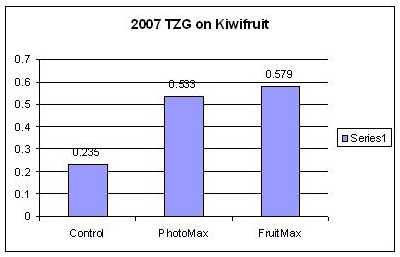 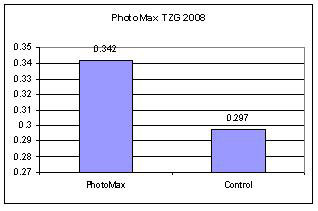 In the early summer of the 2009 season, the PhotoMax areas showed a dramatic difference in vine vigour, and vibrancy, fruit size and later on a reduction in leaf breakdown.

Apply 250mls per hectare or 100mls per acre
for smaller areas 1ml per litre over 80 sqmts.

Spray over plants and soil to “wet”.